A Guam M1 Garand Story: This “Guam Garand” can talk!

Back in the 1990s, I attended the great Baltimore Antique Arms show, one of the premier antique gun shows in the country.  At the time I was focusing on WW2 arms and militaria and quickly found my way to Scott Duff’s table. I had purchased a few firearms from Scott over the years and wanted to see what he had brought to the show. After saying hello I asked Scott what he had brought in the way of exceptional guns. He bent over and reached beneath the table and pulled out an M1 Garand. “This”, he said, “is a Guam Garand.”  Scott proceeded to tell me the story of the 30 M1 Garands owned by the Guam police department. They had owned them since WW2. Scott had kept one of the 30 for himself and was now considering selling it.

When the war with Japan started in December of 1941, 80 members of the Guam “police” known as the Insular Force Guard, fought alongside a handful of Marines until they surrendered to the Japanese after a short battle for the island. Guam remained in Japanses hands until July 1944 when Admiral Nimitz led the 3rd Marine Division and the 77th Infantry Division in an assault on Guam. It was mid-August  before organized resistance by the Japanese ended. However, the Japanese on Guam were far from finished.

“Part of Japan’s terrible cost on Guam was the 10,971 bodies already counted. Yet there were some 10,000 Japanese still on the island. At first some of these men fought and staged ambushes, and a few sniped at the Americans, but soon the remaining Japanese sought only one thing—food! Most of the others fled when encountered. The Japanese now had no central command. They starved, died of dysentery, became too weak to flee, and then blew themselves up with the one precious grenade which they saved to take their own lives. Aggressive American patrols were soon killing or capturing 80 Japanese soldiers and sailors a day. A daring few stole into Marine food storage areas at night. One soldier scribbled: “All around me are enemy only. It takes a brave man indeed to go in search of food.”

In addition to the battlefield casualties, more than 8,500 Japanese were killed or captured on Guam between August 1944 and the end of the war in August 1945.

After the US Navy and Army retook Guam in 1944, Admiral Nimitz formed the Insular Combat Patrol Force which consisted of 3rd Division Marines and 15 Chamorro scouts. The Chamorro were the native indigenous people of the Marianas Islands and had suffered terribly at the hands of the Japanese during Guam’s occupation. For months, the Combat Patrol hunted down the Japanese stragglers hiding in the jungles, killing or capturing, on average, 80 per day. In 1946, Nimitz disbanded the Combat Patrol, leaving future patrolling up to the Chamorro Insular Guard, now with 30 members. This Insular Guard eventually became the Guam Police department and in 1990 still owned the 30 M1 Garand rifles left behind by the Marines.

“The native guides who accompanied many of the Marine and Army patrols during the campaign proper and the mop up period performed invaluable service in ferreting out Japanese troops and equipment” (The recapture of Guam by Major O.R. Lodge, USMC).

Scott’s Guam Garand was an early Springfield Armory rifle made in 1943. It remained largely in its as issued condition. The stock, while worn and pitted from 30-06 clip strikes bore two interesting inscriptions. One, which Scott had not been able to decipher, appeared to say Jap Pa and the other was a set of initials; A.S.P.  I bought the Garand from Scott on the spot.

Once home I first attempted to decipher the illegible inscription. I put a coat of fine machine oil over the letters and shown a bright light on it. At once, it became clear. It said “Jap Pal”. An appropriate, albeit sarcastic, moniker for a rifle used to hunt down enemy Japanese.

The initials were another matter. I wrote to the 3rd Marine Division historical society, the National Archives, and the US Marine Corp in an attempt to find a roster of the Marines who served during the Battle for Guam in 1944.  I had no luck. A kindly conversation with an old Marine gunny sergeant revealed another clue. “No Marine would EVER disfigure their weapon”, he said. “EVER!!”.  “Maybe Infantry, but never a Marine !”  The 77th Army Infantry Division had participated in the battle. Could the M1 Garand have been initialed by a GI? The Combat Patrol Force was made up of Marines and Guamanian scouts. So the M1s given to the Chamorro scouts were most likely originally Marine issued guns. But who knows. After a battle, there were likely discarded weapons on every beachhead, left by wounded or KIA soldiers. Years slipped by and I resolved I would never solve the riddle of “Jap Pal” and “ASP”. I was content to appreciate the rifle for its history and positive association with one of the great battles of WW2.

Then in 2016 I was again searching for information on the battle of Guam and the Insular Combat Force . I found this on the internet under a site called Guampedia… here is part of the entry.

“As part of the “mop-up” operation of the American liberation forces, the Guam Combat Patrol was formed to scout out the hundreds of Japanese who had taken to Guam’s jungles. They moved on foot, combing jungle areas, and questioned islanders in their efforts to track, capture and kill Japanese holdouts and destroy locations and hideouts. The Patrol’s mission was considered one of the most dangerous military combat duties in Guam after the invasion. They were considered “manhunters,” killing more than 117 Japanese stragglers, and capturing five.

As members of the Guam Police, these Chamorro volunteers functioned as regular patrol members during the first two years after the recapture of the island. The original 15 members were recruited from the police department, augmented later by other volunteers and were later attached to the Marine Corps.

The Guam Combat Patrol was led by Police Staff Sergeant Juan U. Aguon, who received many citations and endorsements from Naval Government officials for his “long hours, tireless efforts, faithful services, and excellent record of leadership.”Of particular significance, Aguon was awarded the Silver Star by President Harry S Truman for his participation in the Combat Patrol.

The Combat Patrol was disbanded in November 1948.”

I couldn’t believe it ! A list of all of the original members of the patrol ! And only one with the initials A.S.P ! 29 members and 30 M1 Garands. Here is a picture of fourteen of the original fifteen members. Agapito S. Perez is one of the men in the picture. 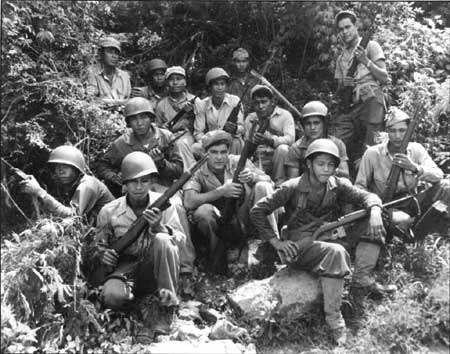 Although I will never be 100% sure that this M1 Garand was carried by Agapito S. Perez, it seems very likely.

There were over 5 million Garands made and very few of them can be documented to a battle, let alone a person. This M1 Garand was likely issued to the 3rd Marine Division. It was probably carried into the battle by one of the many Marines who became a casualty. Recovered, it was then issued to the group of Chamorro scouts assisting the Marines in mop up operations on Guam.  Agapito had a sense of humor, carving Jap Pal and his initials into the stock.

Please enter your contact information and inquiry in the fields below and we will get back to you shortly regarding this item. Alternatively, feel free to give us a call at (406)640-2232.